‘No pressure’ as Van Wyk strides to victory at Clovelly

A day after completing his Grade 12 exams, Southern Cape junior Ben van Wyk shot one of the rounds of his life to win the Bridge Fund Managers Junior Series event at Clovelly with a round of 67 that included two bogeys in the final three holes.

“I guess I just took the pressure off myself,” he said. “My main focus of this trip was the junior event in Worcester next week – and having written my last exam yesterday, I really didn’t have any expectations coming into the Bridge Fund event. I just wanted to enjoy myself – and that’s what I did. I’m delighted to have won.”

The 17-year-old Grade 12 pupil at McKinley Reid School in George got his round off to the best of starts with four straight birdies from the 2nd hole.

“I found a lot of fairways and greens,” he explained, “and I took advantage of the par fives. Luckily my putter was working today”.

He added further birdies at 10 and 11, and another at the par-five 15th to get to -7 for the round as his nearest challengers failed to keep up with his impressive scoring. Bryanston’s Nikhil Rama threatened make a go of it after birdieing four of the first seven holes, but failed to take advantage, while former SA Amateur champion Christo Lamprecht Jr left his charge a little too late and finished runner up, two shots behind Van Wyk. 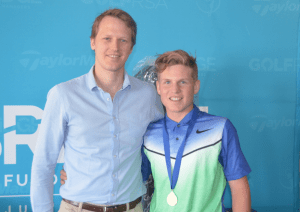 Van Wyk won by two strokes after posting a round of 5-under-par 67.

“It’s my first big win,” van Wyk beamed, “and I really can’t wait to play in the Final. My brother [Alex] is at university in the USA, so there is extra motivation to win the Final.”

“I play a lot against guys like Christo in the Southern Cape, and we are both part of the Louis 57 Academy, but it’s nice to know I can beat them when it counts. This has done a lot for my confidence, knowing that I can take on the big name players.”

In the Under-13 section, Joshua van Niekerk of Bellville raced to victory on an impressive score of 45 Stableford points.